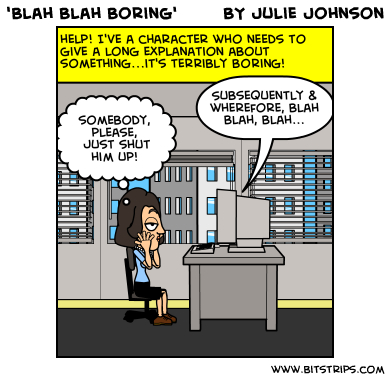 I’ve a character in my novel who needs to explain a few things to the heroine. He needs to tell about what happened when he went to the Red Lion Inn a few days ago…its very important to the plot, so it must be done. This information must be revealed and he has to tell her . It can’t come across in flashbacks or a dream sequence or any other writer-trick, because the book’s written in the heroine’s voice, first person. He tells her the news and she tells the reader, and, of course, she reacts and converses back at him and tells the reader all about that, too.

It’s actually quite painful to write an explanation. Though necessary, the detail is tedious and it feels like it takes too long to impart. I’ve tried breaking it down into chunks, and delivering it via dialogue, interspersed with the heroines’ wry observations and her own lively reactions, but still it comes across like some kind of boring legal document, overloaded with detail after detail:

And so, in part a, subsection i, sub-subsection 1.0, the man then followed the other man down the street to the physicians.

In part a, subsection i, sub-section 1.1, the man waited outside the physician’s house for the man to reappear…

ARG! How do I make this explanation less boring? Any and all suggestions greatly appreciated!