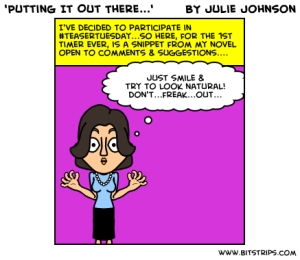 I came across @Madison_Woods’ idea of #teasertuesday 2 days ago and decided on the spur of the moment to participate. I’ve never, ever put my novel on-line before. The only person who’s read any of it is my husband and my best friend Jen…so this is a big step.

It was hard to pick a selection. My book is a ‘comedic Regency mystery’. It’s a bit of a soap opera; a bit of a send up as it pays loving homage to Jane Austen’s era. It also has a lot of plot twists and so I had to find a scene that didn’t give too much away…

This scene occurs early on in the book, when we (as readers) first meet the Rutherford family at their dinner party…

Eight o’clock that evening saw me standing in the Rutherford’s green chintz drawing room in their town home on Brook Street, doing my duty by my aunt.

“He’s the second son of a Viscount,” I was telling Miss Jane Rutherford, somewhat manic with my enthusiasm. “Pleasant looking. Moral.  Income of a thousand pounds. Attended Cambridge. Very intelligent. Speaks six languages. Has traveled widely in the east and has recently returned from an excursion to Turkey. He will be looking for a wife next Season.” She was to meet him next Saturday, six months before the Season even started. A perfect plan.

Miss Rutherford, of course, was only half listening, looking past me to the window, which was dark and showed our reflections. We were both brunette, and clad in vibrant colours: hers, blue, mine green. Each of us wore silver pendant earrings that dangled at the slightest movement as well as a cross necklace. My aunt had bought us a similar set, in an effort to bring us closer.

Her brother, William Rutherford, neared us then, ready as usual to rescue his sister from my bad influence. Of course he was looking well—dark haired, dark eyed, refined—but then his looks had never been the problem.

He had barely greeted us when Jane’s mother beckoned her from across the room, a rather obvious ploy. We all shared a glance (her hopes for her son and I being totally transparent from the start) before Jane went off and Mr. Rutherford and I made dutiful small talk, alone.

“Well, well,” he said, with a tight little smile. “Second son of a Viscount. My mother is ecstatic.”

“I’m pleased to hear it,” I returned with deliberate sweetness.

“Of course my sister is not as impressionable. She is not as easily swayed by a thousand pounds and a family estate in Hertfordshire—as you well know.”

“Yes,” I agreed, “but she may take an interest in his collection of eastern artifacts, which is considered to be very fine.”

“Perhaps,” he allowed, grimly.”But I wouldn’t reckon on it.”

“Their mutual interests could very well engender mutual regard and affection,” I insisted—sounding, even to myself, ridiculous. I no more believed that than he did.

“A love match?” He scoffed.

“A happy ending?” He scoffed again.

“Why not?” I countered, somewhat gruffly. “Does she not deserve it?”

Surely, he couldn’t find fault with that line of reasoning but he still looked displeased, as usual—the man always looked pained around me, as if he had a burr in his boots. And he was at the ready again to make comment–.

Thank god his friends arrived then, interrupting our dispute with their apologetic entrance. Living in Holburn, they were often the last to arrive.

Mr. Murray was an attractive, disheveled Scotsmen with bright eyes and a deep voice, who greeted me with his usual warm enthusiasm. His wife also gave me a gusty hello. She was an energetic, dark-haired pixie who no doubt had her husband’s neck cloth as taunt as a bow string upon leaving the house. Two minutes later, he would have rumpled it like sack cloth. Same with his hair.

Naturally personable, they gathered everyone round and started to rave about The Merchant of Venice, which they’d seen at Drury Lane last week—filling in each others sentences, how cute!

Theirs was obviously a love match.

11 thoughts on “#teasertuesday a.k.a Putting It Out There…” 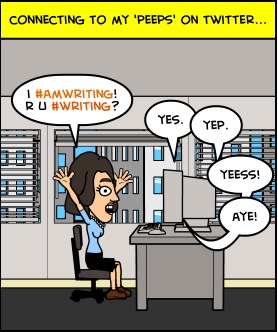 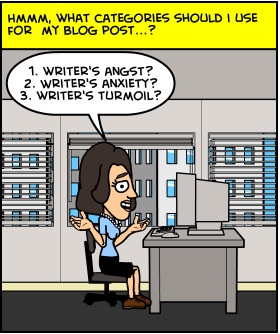