Thanks to a corrupt file, I lost some writing–pretty much everything I’d worked on this past month (about three big scenes). Luckily I have everything up to that point–thanks to myself emailing a copy to myself at the end of Jan–but it looks like I will need to re-write those three scenes I’d written.

Here’s a time when I wish I had a photographic memory!

Times a’wasting, I keep telling myself.  You have to sit down and just get started. Take a look at the jagged end piece you’ve been left with, and start sifting through the rubble of your mind to figure out what is supposed to go next…

This sounds so easy and practical–just start writing–but the truth is writing is an emotional event. I find it incredibly emotional. The loss of those three scenes–hardly much in the scheme of things–has hit me hard nonetheless.  I’ve cursed the universe (why, universe why?) and (drama queen that I am) even shook my fist at the sky: well, forget it then! You win! I’ll never write again! NEVER!

It seems, frankly, like too much work. Better just to curl up into a corner and whimper: ‘I used to be a writer once’. *sniff*

But no. I cannot allow such a thing. So here’s my list to myself and to any other writers out there who want to Give Up When The Going Gets Tough. This how you get back into it!

1. Moping is OK–for a little bit. But don’t let it go on too long. In my case, it took me at least 24 hours and a night’s sleep to even be able to talk about ‘the incident’ without my voice cracking.  So I knew I needed some time and space. I gave myself a deadline. I gave myself two days. Then I sat down at the computer again…opened my old writing file again…

3. Go back and re-read. Reconnect with the energy. Start reading from the beginning or just the last few scenes (which is what I did), or even random scenes or favourite scenes. Get back in touch with the feel of it, the characters, the world, the vibe. GO GET YOUR WRITING MOJO BACK!

4. Realize you may idealize. Of course I’m convinced that the writing I just lost was The Best Writing Ever. I will try to convince myself that what I re-write now needs to be the same–in other words, perfect! But that is impossible (and, realistically, it wasn’t perfect to begin with). So I need some flexibility. I need to get back to that sense of play, recreate the scenes in the way that they flow now, as they come to me now. The point here now is to: just let it come. 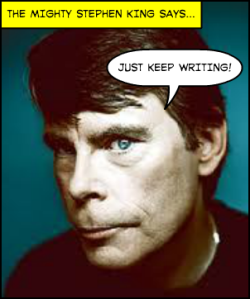 7. Rekindle your kinship with writers everywhere. A couple of posts ago I mentioned the Legend of Stephen King, and    told the tale of how, in the midst of working on his first novel, Carrie, he tossed it in the trash. In a fit of frustration, the mighty Stephen King threw what he had written into the garbage… and his wife rescued it…and…somehow, someway, he found the resolve to start working on it again…and the rest, as they say, is history…

So you see, it happens to writers. All kinds of writers. It’s part of the Writing Life for some of us. Moments of self doubt and frustration and I-give-up-ness.

8. AFFIRM. Moments of I-give-up-ness can come from anywhere, not just from a corrupted file and loss of work. Here’s a few common scenerios: the my-writing-is-crap, the I-have-no-time-for-this-what-about-my-day-job, the no-one-gets-why-I-have-to-do-this-so-why-am-I-doing-it, the I-will-never-make-any-money-doing-this-will-I doldrums.

The very act of sitting in front of the computer or picking up the pen is an act of defiance against those voices that tell us NO. It is act of affirmation. it doesn’t matter what comes out of the pen/keyboard. Maybe don’t work on your main writing piece. Jot a poem, a haiku, a journal entry, a blog post, a writing exercise based on a writing prompt…JUST AFFIRM THE POWER OF THE WRITTEN WORD. Get that affirmation, that sense of writerly strength again. You ARE a writer. You CAN do this. You were MEANT to do this…so by god/goddess grab that pen/keyboard, fire up that keen mind of yours…AND GO AND DO IT!

Well. 9 points of support. That’s not a bad way to start, is it?

(Writers are a resilient bunch, aren’t we?)